Where’s Your Helmet? Why I Stopped Wearing Mine

Where’s Your Helmet? Why I Stopped Wearing Mine

I’ve been riding for transport for about 10 years now and have probably clocked up about 20,000 miles on my local roads. For most of that time I wore a helmet but recently I have stopped, and I’ve even taken the decision to hang up my kids’ helmets as well. For many, even within the world of bikes, this is considered a strange and counterproductive decision. For people that don’t ride it can even seem suicidal. Occasionally I can see the looks of concern on the faces of people we pass by.

Everything I do on a bike is done with care and thought so I thought I’d write a post about why I made the decision to ride lidless.

First of all, it’s important that I acknowledge that if I should fall from my bike and land on my head then the chances of me incurring a minor or serious injury are likely to increase. It’s not certain – helmets only offer protection up to a certain speed and strength of impact – but I do admit that I leave myself open to embarrassment by writing this post.

There are types of riding where helmets make a much more sense and are occasionally mandatory (mountain biking and competitive racing) but I have no real experience of either. I hope that we can all at least agree that riding with my kids to see Gran and Grandpa and 5-8mph is a very different activity to thrashing down a rocky hill at 25mph before jumping off a cliff and floating to the valley floor with a wingsuit and parachute. There are also other everyday activities that are far more risky – walking on an icy pavement, taking a shower or when climbing a ladder (see this piece by Carlton Reid for further examples). Oh, and head injuries in car crashes are far more common than you’d think, so why aren’t many talking about driving helmets or Formula One style head and neck support systems?

Dig deeper into the maths and science of it all and it becomes far more complex and fascinating. I’m trying to keep this post brief as you could literally write a book on the subject but here is my main thesis, and ends with the conclusion that helmets make cycling less safe:

“The promotion of bicycle helmets enforces the idea that cycling is an unsafe activity (which it isn’t) and so acts as a barrier to cycling which, in turn, magnifies far more damaging problems with transport emissions, air pollution and road danger.”

There, I said it.

Thankfully in the UK there is no serious debate about making helmets compulsory when riding. Sure, it’s mentioned all of the time on Twitter and on newspaper website comment sections but no minister has seriously considered it, even with the odd bit of pressure from healthcare experts.

It’s just as well, because countries and regions that have pursued this kind of policy have seen a reduction in levels of cycling and an increase injuries while riding. Beware the law of unintended consequences. Reminder: we have an incredibly short amount of time to decarbonise transport in the UK (my own council report states that we should remove all petrol/diesel cars and vans from our streets by 2030) – why would we want to make conditions for cycling harder, right at the point where it needs to be made dramatically more straight forward?

Often it can feel like helmets are a stick to beat us with. Social media comments are easy to deal with (the best way is to ignore, usually), but I’ve had plenty of comments in the real world. Parents have asked me about it at the school gates. ‘Where are their helmets, Daddy?’ from kids are always interesting. My ‘worst’ (best?) came when I was out on a very sedate ride with my family and a chap dressed for a very different kind of ride (one that involves tracking your average speed and attempting speeds of 40mph+ on a downhill section) shouted from about 50 metres ‘HELMETS!’ and pointed at his noggin. Mind your own business, dude.

Google has an interesting idea of what a ‘cyclist’ should look like. I had to get through 24 images before finding a photo of a rider without one, though it was still a man dressed in lycra who looked like he’d just taken his off. I had to scroll much further before I found a photo of a person on an everyday bike, looking dressed for the destination rather than a 80 mile journey. Maybe that’s part of the problem. I don’t see myself as a ‘cyclist’ at all – and my wife and kids certainly don’t. We’re people that try our best to use our bikes for short to medium length trips. Sometimes we walk. Occasionally we even use our cars or catch a bus/train. Sometimes it’s a combination. The ‘othering’ of cyclists has been helped by helmet promotion and in the most extreme cases has

Now I’m a fully grown man (well, I’m 5 foot 6 so almost fully grown) so people will understand that I can make the decision whether or not to wear one. They may struggle more with my decision put one on my children as they set off each morning to school, or for the short trips to visit friends and family.

The love I have for my family cannot be expressed by any known mathematical formula or written in any language created by humankind so far (certain GIFs and/or memes come close) so remember this: when I take my kids out on the hostile roads of the UK I do so in full knowledge of the risks and the rewards of riding a bicycle for leisure or transport.

My reasoning to now clad my children in ‘safety’ equipment is the same. Helmets are not about safety. They are a very poor and half hearted attempt to protect us from the hostile roads that years of transport culture focussed on driving have left us with. In the words of Tom Flood, the Canadian version of me whom I spoke with at length in late 2020, ‘There will never be a helmet strong enough to make up for poor infrastructure.” 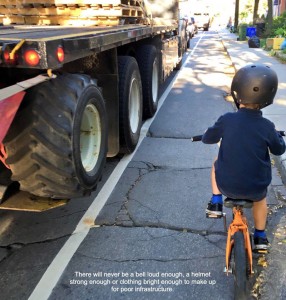 I need to make it clear that I do not look down my nose at people that choose to wear helmets when riding. If you’re on a bike, scooter or adapted cycle for leisure, to get to the shops/school or for any other reason then that makes me happy. My concern is with getting more people out of cars and onto two (or three) wheels, using their arms or legs as a source of power. I’ve met and talked with people who have had their lives saved by helmets. I’ve gone toe to toe with brain injury experts and come out swinging. Heck, I’ve even been to A&E twice with my own son with head injuries (once he fell into a fireplace and another time he fell head first out of a tree) and I’ve had my fair share of incidents on UK roads (just ask Merseyside Police). Brain injuries are no fun.

So why do I persist? Why not just where a helmet??! Well, they’re a barrier to getting more people active and on bikes, that’s why! The should be available for those that choose to wear them but, by continuing the narrative that they an necessary piece of kit when riding you are enforcing the idea that riding a bike is a dangerous activity.

In conclusion, bike helmets are a distraction from the far bigger issues we face in the race to decarbonise our transport system. Sure, wear a helmet if it makes you feel safer and increases the amount of riding you do. However, by giving any weight to them as a necessity for cycling you are damaging efforts to get more people bikes and will, consciously or otherwise, be working against the hard work to normalise riding a bike for transport.

If you want to read a far more qualified piece of work full of stats and figures then this one by Peter Walker is the place to go. Chris Boardman has written and talked about this at length as well.

At Rethink Now CIC we have a very simple philosophy:

Sustainable Transport is as easy as ABC. Anything. But. Car.

For many the idea of a car free world seems impossible but it is not. Interestingly, the longer we delay climate action the more likely it is to be ushered in. Every unit of energy spent on infrastructure for cars (electric cars included) means we lose the opportunity to save tonnes of CO2 by enabling more walking and cycling but at the same time, that wasted energy increases the likely hood of a catastrophic collapse in the complex systems that allow 7 billion or so humans to exist on this fragile ball of rock.

There ain’t no helmet strong enough to protect us from that.